Brighton, dubbed “the poster child for digital innovation”, is one of the cities exploring how technology can make life better for its citizens. In the first of a series of features about Brighton’s digital future Phil Jones, managing director of Wired Sussex, talks about why Brighton aims to be a centre of expertise for the city of tomorrow.

The Brighton Digital Festival currently running citywide is a great example of a Brighton success story, says Phil Jones as we chat over coffee in the buzzing offices of Wired Sussex in New England House, a membership organisation for companies and freelancers operating in the digital, media and technology sector.

A month long programme of events exploring digital culture and celebrating Brighton’s creativity, the BDF is an open programme of independent events augmented by commissioned arts and education programming. The programme this year has included thought-provoking digital art and music, conferences, performances, and opportunities to experience other worlds – with The Old Market in Hove proving a popular place to experience virtual reality. The festival which runs until 13th October has had a record number of visitors (including many of us here at Curve IT).

Wired Sussex and Lighthouse provided the platform for the festival five years ago, setting up a website and helping promote it, explains Jones.  “It wasn’t curated and it wasn’t limited; anyone could do it. In the first year we had 40 events, the third, 130 and this year there are at least 200. It’s the fastest growing digital festival in the country.” 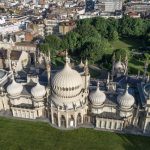 But then Brighton has a historical reputation of being very innovative, as Jones points out.

“Look at Brighton Pavilion – which someone once described as ‘the  googleplex of its day’! It was very technologically advanced for its time, and was one of the first places in the country to have electric light.” The Body Shop and Stomp were other niche concepts which at the time could only have taken root in Brighton and went on to achieve global success.

It’s the same with the digital sector, he believes.  “Brighton’s digital community was seen as ‘just a bunch of hippies with laptops on the beach’ but that hippy on the beach is often someone who can make an idea reality. Having ideas that push boundaries is the first step of innovation.”

In the early days of the Apple Mac, more people per head of the population had Apple Macs in Brighton than anywhere else in the whole of Europe, adds Jones. “People were buying a piece of kit designed to empower them and help them be creative. It was the seeds of the digital cluster we have today.”

Brighton now has one of the fastest-growing creative and digital clusters in the country, and the digital economy is the fastest-growing sector, worth more than £1million annually to the city – particularly impressive when you consider it didn’t exist 15 years ago.

The government-backed Digital Catapult centre, an R&D lab based in the Wired Sussex office, two floors above Curve IT, aims to support the creation of a host of new technology products, services and jobs and is currently running projects focusing on the Internet of Place.

Notably, the 5G testbed in Brighton is the first in the UK that isn’t based within a University.

“It’s not open for business yet but will be available very early in the New Year,” says Jones. “The 5G testbed in Brighton is another example of the city being the first place in the country to spot an opportunity, follow it up – and hopefully be part of an explosion of new businesses and technology. 5G provides the best connectivity for IoT, immersive tech, AI – it’s incredibly fast, much more stable and has very little latency.”

“Marek Kohn [a Brighton-based science writer] once wrote that the default position for Brighton is gazing into the distance, and I think that’s a metaphor for what we try and do in innovation terms – we try and gaze into the distance,” says Phil Jones. “Brighton welcomes ideas, it’s prepared to test new ideas and take them forward.”

Next in the series: Phil Jones talks about how Brighton is positioning itself as a Smart City